Even if you believe the PTABs post-grant proceedings have generally played a positive role in eliminating some junk patents, the evidence shows that PTAB is violating the spirit of §325(d) of the America Invents Act —and the intent of Congress—by failing to limit double jeopardy and the serial harassment of patent owners in patent examination 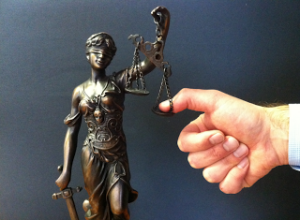 By way of background, §325(d) is the section of the AIA which specifies, in pertinent part, “In determining whether to institute or order a [patent trial], the Director may take into account whether, and reject the petition or request because, the same or substantially the same prior art or arguments previously were presented to the Office.”

This is all very reasonable, of course. Congress wanted to implement an adjudicative process that would get rid of “bad” patents, but would be fair to patent owners by preventing double jeopardy on, and serial attacks against, their duly granted intellectual property rights.

Unfortunately, the PTO director—or rather, the PTAB as the director’s delegate—rarely sees fit to exercise Congress’s clear intent as it goes about what appears to be the business of eliminating as many issued claims as possible and thereby destroying patent portfolios.

According to our friends at Docket Navigator, there have been 677 patent trials in which the issue of §325(d) has been raised as grounds to deny a petition. Between complete denials and denials-in-part based on §325(d), the PTAB has only exercised this discretion 189 times, or 28% of those cases. In other words, when a Patent Owner has presented the PTAB with an argument that the art being used to support the petition was in front of the Examiner during prosecution, or that it had previously been cited against the claims in a preceding trial, the PTAB only saw fit to deny the petition on those grounds a little over a quarter of the time.

Even if you give the PTAB the benefit of the doubt and assume there’s a meaningful number of those cases wherein the Patent Owner is stretching the applicability of §325(d), that’s still an abysmal record of use for a tool designed to prevent harassment. This is especially true given that the Patent Owner must make some evidentiary showing of the cited art having been previously in front of the Office. It’s not like the Patent Owner can simply demand PTAB take his word for it and consider §325(d) in a vacuum.

But if you think the statistics showing only sporadic use of§325(d) are troublesome, wait until you see the reasoning often cited by the PTAB for declining to “exercise its discretion” under this rule. Just last month, two cases revealed the contorted gymnastics the PTAB goes through to avoid denying double jeopardy petitions under §325(d).

In the first case, IPR2017-00178, Paper 6, pgs. 12-13, PTAB openly acknowledged that the art cited in the petition had indeed been considered during the original examination. But it came up with a rather novel way to disregard that dispositive fact anyway:

The evidence supports Patent Owner’s assertion that Fujinawa and Watanabe were cited in an IDS [Information Disclosure Statement] and the Examiner considered both references. See Ex. 2002. But, there is no indication in the record that the Examiner rejected any claims based on either reference or that the Examiner or applicant substantively discussed either reference during prosecution of the ’019 patent. Furthermore, Petitioner’s obviousness challenge also relies on the testimony of its witness, Anthony J. Senn (see Pet. 15); and Patent Owner does not argue this testimony is duplicative of evidence submitted previously to the Office. Under these circumstances, we decline to exercise our discretion to deny this ground under §325(d).

Let’s parse out PTAB’s Orwellian logic, and see if we can’t divine the bizarre standard it is trying to impose upon Congress’s clear intent with §325(d) to limit double jeopardy.

Firstly, it appears that PTAB is saying that citing a reference in an IDS, which is the method used by applicants for putting a reference formally in front of the Examiner in compliance with the legal requirements for notification, is somehow—and for unspecified reasons—insufficient for invoking §325(d) against double jeopardy.

Is the PTAB arguing that unless the references were actually used in a rejection of the claims, they somehow don’t count—despite the fact that the Examiner formally acknowledged the references by initialing next to them on the IDS? If the Patent Office itself, through the auspices of the PTAB, is essentially stating for the record that citing a reference in an IDS does not count as having that reference considered during examination, then what is the point of the IDS process itself—or of the notification requirement in general?

If that is what PTAB and the Patent Office intend, then what is an applicant supposed to do to ensure the PTAB, in its infinite wisdom, will one day consider a cited reference to “count”? Beg the Examiner to use it in a rejection even if that Examiner doesn’t believe the reference teaches the pending claims?

The PTAB has hereby created a veritable Catch 22 for patent applicants. All any applicant can do is submit a reference to an Examiner for consideration through an IDS—he literally has no other option available. But the Office, via the PTAB, later penalizes this applicant for following the very rules it has laid down.

The second excuse PTAB offers for not invoking the rule against double jeopardy is that somehow, because the Examiner did not have the “benefit” of the expert declaration later submitted with the petition, the petition cannot be seen as being duplicative of the examination process. This is so ridiculous as to strain credulity, because under the Office’s own rules, there is no vehicle in the ex parte examination process for a third party to put testimonial evidence of un-patentability in front of an Examiner—let alone a declaration that was written months, if not years after examination.

And here we have the full Orwellian beauty of the this whole Catch-22 assault on the Patent Owner. The PTAB is announcing that since the applicant did not perform the prohibited, not to mention physically impossible, act of encouraging some third party to file a declaration challenging the patentability of the pending claims—written, by the way, in the future—during the initial examination process, therefore §325(d) cannot apply.

Well, then, §325(d) can never apply, can it? And since the standard principles of statutory construction do not include contemplation of the impossible, this cannot be how Congress intended for §325(d) to be applied.

Although Treyz and Fuller were both before the Examiner during prosecution, and although Petitioner relies upon similar reasoning as to why the two references would be combined by one of ordinary skill in the art, we are directed to insufficient evidence that the Examiner ever considered the ‘exact same … arguments’ set forth by Petitioner in this proceeding, as Patent Owner contends. Prelim. Resp. 26–27. Accordingly, we decline to exercise our discretion to deny institution under 35 U.S.C. §325(d).

So despite the fact that both references were before the Examiner during prosecution in the 00122 case—and despite the additional fact that the Petitioner in this case admittedly-used similar reasoning for a motivation to combine—then because the Examiner never considered the “exact same … arguments,” this means that §325(d) cannot be invoked?

This reasoning in both the above cases is so patently ludicrous as to defy belief, and would be comical if they weren’t so sad—and so destructive of IP rights.

This resistance to applying §325(d) is made even more incomprehensible if one considers the PTAB’s propensity for cutting off due process in a patent trial by citing the need to preserve its limited judicial resources and ensure that trials are completed in 12 months. One would think a great way to accomplish both would be to stop reviewing claims in light of art that had demonstrably been before the Examiner or before the PTAB in a previous trial.

But then that would be the logical and sane approach—not to mention the approach Congress clearly intended in drafting §325(d) in the first place.