IPWire: Wake Up Call! Inventor Congressman Has Been No Friend To Inventors

That’s not to say I boycott Crouch’s admittedly useful and informative website. If someone throws a link my way, I’ll check it out. 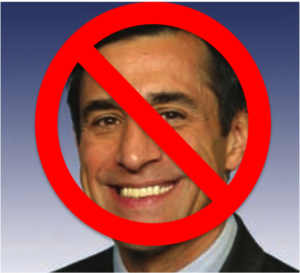 However, on a day-to-day basis, I prefer to study what’s happening in my industry by reading the court decisions directly, rather than reading what other people have to say about them. That said, I assumed that the folks at PatentlyO are similarly tuned in and aware of the ins and outs of patent enforcement.

However, this morning I am left wondering what planet Dennis Crouch has been on for the past 10 years, and how he could be seemingly unaware of the damage being done to the US patent system by Congressman Issa, but the abject irony in his doing so?

In a very snide remark, Crouch seemingly attacks inventor and inventor’s champion Paul Morinville for celebrating Issa’s decision to not seek reelection in the California 49th District, referring to communication from Morinville as “a funny email.” Crouch then, apparently unironically, praises Issa’s background as a listed inventor, claiming that:

“[t]his background meant that Issa was both knowledgeable and interested in the U.S. patent system.”

Truth be told, I had high hopes for Issa as well when I learned of his background during the AIA debates, only to have them quickly dashed. However, in the event that you, like Professor Crouch, are in need of a refresher, here are a few more post-AIA sins. In 2012, Issa sponsored property-rights killing “PARTS” bill. In June 2017, Issa scoffed at scholar Adam Mossoff’s research which clearly shows how the US will fall behind China and Europe based on our current patent eligibility jurisprudence. And then in July, he falsely accused a federal judge of nepotism for daring to interpret the massive white space left in the wake of a Supreme Court decision.

Make no mistake, Darrell Issa has been the enemy of inventors and patent holders everywhere. Having earned over $250M through patent enforcement, Congressman Carpetbagger has been more than happy to eviscerate property rights and prevent others from enjoying his success. Frankly, Issa’s betrayal on the roots of his success has been so brazen and disappointing, that I find it shocking to have to educate anyone on his list of offenses, let alone someone who has covered the IP space for the better part of the last 2 decades.